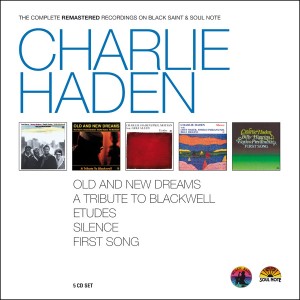 The five discs that comprise this singular boxed set speak not only to Charlie Haden’s brilliance as a bassist, composer, bandleader, and collaborator, but also to the vital position that the Black Saint and Soul Note record labels hold in the jazz cannon.

In the mid-1970’s, as many American jazz musicians struggled to find a stateside record label to record and release their work, Italian jazz lover Giacomo Pelliciotti stepped in to fill the void. His Black Saint label would be an independent haven for perennially under-recorded American artists like Billy Harper, Frank Lowe, and Old and New Dreams, the egalitarian quartet of Don Cherry, Dewey Redman, Charlie Haden, and Ed Blackwell.

The self-titled 1977 release by the quartet of former Ornette Coleman collaborators that opens this boxed set was Black Saint’s thirteenth release, and marked the beginning of Charlie Haden’s recording relationship with the label and its soon-to-be-formed sister company, Soul Note. It also unofficially marked the end of Pelliciotti’s ownership of the fledgling company. In late 1977, Giovanni Bonandrini purchased Black Saint, and within two years he created Soul Note, a label that would present more mainstream American jazz artists, along with a growing number of first-rate Italian improvisers.

On both their debut album and 1987 reunion concert A Tribute to Blackwell — both recorded for Black Saint — Old and New Dreams focus on delivering melodically-driven, open ended improvisations with a focus on group interplay that hearkens to their shared work with Coleman. The later album, a live concert taped at The Ed Blackwell Festival in Atlanta more than a decade after the former, revisits classic pieces like the Redman original “Dewey’s Tune,” along with several Coleman originals like “Happy House” and “Street Woman,” and finds Haden and Blackwell cutting a deep, swinging pocket below the flights of Redman and an ebullient Don Cherry.

Haden’s comfort among avant-garde and more mainstream camps made him a perfect fit for both the fledgling Black Saint and Soul Note labels. “Haden’s musical life is a varied one,” annotator Gary Giddens points out in the notes to Silence, the incredible Soul Note quartet date from 1987 that joins Haden with longtime collaborator Billy Higgins, the Italian pianist Enrico Pieranunzi and an inspired Chet Baker, “and it is a fact that there is no style of jazz in which he is not at home.”

Listening to the mix of standards, bop anthems, and originals that comprise Silence, it’s easy to hear why Giddens felt the need to explain Haden’s diverse musical proclivities to listeners only familiar with his groundbreaking work with Ornette Coleman. The feel of the album’s opener “Visa” — the Charlie Parker blues head — is breezy, uncomplicated swing, but seconds into Chet Baker’s lilting, masterful solo, it’s clear that the album is more summit meeting than mere blowing session. Haden’s light but insistent quarter notes fall easily in to the pocket of Higgins’ sizzling ride cymbal while managing to push ever so slightly as Baker and Pieranunzi deliver effortless, harmonically sophisticated improvisations.

The quartet’s performance throughout the album is uniformly excellent — a special highlight is Baker’s creative and poignant vocal and trumpet work on “My Funny Valentine — but their ensemble work on the title track — Haden’s original — is a high point. Against solemn chords and supple brushed percussion, Baker, Pieranunzi, and Haden deliver solos of unalloyed beauty.

Two-and-a-half years later — following the tragic death of Baker in 1988 — Haden, Pieranunzi, and Higgins once again gathered in Italy to record for Soul Note. The resulting album, First Song, closes the boxed set, representing Handen’s final recording for the record label, and stands as a remarkable document of the trio’s sublime rapport. As in the Silence session with Baker, the repertoire is heady mix of tin pan alley, bop standards, and singular originals by Haden and Pieranunzi, and once again, the band is on fire. Haden and Higgins’ connection is of course one of the most celebrated in jazz — beginning at the Hillcrest Club in Los Angeles with Ornette Coleman in the late 1950s — but Pieranunzi plays with the pair like he’s been there all along, delivering snaking right hand lines on Lennie Tristano’s “Lennie’s Pennies,” graceful waltz phrases on his origianal “Je Ne Sais Quoi,” and the perfect mix of pathos and uplift in the album’s namesake, Haden’s wonderful composition “First Song.”

Haden’s mastery as a trio performer and other-worldly ability to become one with the right drummer are immediately apparent on “Lonely Woman,” the iconic Ornette tune that opens Etudes, another late ‘80s Soul Note date. The bassist is joined here by another long-time collaborator Paul Motian on drums, and the young, daring pianist Geri Allen who follow Haden’s hypnotic strummed bass intro with ten minutes of gorgeous group interplay.

Despite being a relative newcomer in 1988, Allen plays like a seasoned veteran throughout the disc, notably on her original “Dolphy’s Dance,” a piece that finds her channeling Andrew Hill, Paul Bley, and Herbie Nichols while sounding utterly original. The fact that the trio had been gigging extensively in the lead-up to the recording session is evident in the driving, endlessly creative swing of Haden’s “Blues in Motion” and the sheer exuberance of Herbie Nichols’ “Shuffle Montgomery,” but the two takes of Motian’s original “Etude” catch the trio in highest flight, exploring an unadorned melody with passion, open ears and hearts.

This article will appear in print in the April 2012 edition of The New York City Jazz Record.