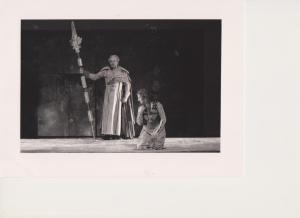 I was lucky to hear some great music around Macon in the last two weeks, but the standout event was getting a chance to meet the Macon-born and European-based opera singer Allan Evans during his holiday stop in town to visit his family.I got the opportunity to research Evans’ career and profile him at length last year, and was amazed at the story of a man who grew up at the height of Jim Crow, but managed — with the help of family and a bevy of dedicated teachers — to become an internationally known opera singer.

Evans was a classmate of Otis Redding at Ballard Hudson High School in the late 1950s, and by the time Redding was climbing the popular music charts in the early ‘60s,  Evans was studying at The Juilliard School in New York, and planning a move to Europe to pursue his career.

Since settling in Germany in the late ‘60s, Evans has established himself as one of the world’s preeminent bass-baritone singers, and in 1996 he was awarded the title of Kammersanger, or chamber singer, which is one of the highest honors the German government bestows on distinguished performers. He has performed many of the so-called “heroic baritone” roles — among them Don Giovanni, Dr. Schön in Alban Berg’s Lulu, and the Norse god Wotan in Richard Wagner’s Die Walküre — that define the role of the bass-baritone singer. Evans still performs and teaches regularly in his adoptive hometown of Mannheim, Germany, but manages to visit Macon regularly to visit his family and perform.

Despite Macon’s sterling record of celebrating hometown musical heroes like Redding, Little Richard, and The Allman Brothers, Allan Evans has never received the recognition he deserves here. Granted, it’s hard to imagine an opera singer garnering the adulation that a popular rock or soul musician would in Macon, but it is certainly high time that the city officially recognized Evans’ incredible life and career.

On the 20th, I caught the ethereal trio Tanosweg along with the rhythmically progressive Xavii, at The Hangar Bar and Grill on Houston Road. The inscrutably named Tanosweg features vocalist Meghan Dowlen along with guitarists Dustin Murdock and Zack Matthews performing original compositions that often pair earthy vocal harmonies with unpredictable guitar lines, and a range of percussive effects. Stripped of the rhythmic and harmonic tumult inherent in much of their earlier work together in bands like Xavii and The Polygraph Event, Tanosweg focuses heavily on dramatic melodies building toward catharsis. I’m looking forward to hearing an album from them sometime soon.

Xavii has firmly established its reputation as the foremost purveyor of rhythmically sophisticated rock music in Macon, and their set at the Hangar Bar was typical in its unrelenting drive and carefully crafted abstraction. Murdock and Matthews lead the band as composers and musical instigators — lending a mercurial edge to the group’s sound with their veering guitar lines and effects — but the heart of the group’s rhythmic power lies in the tandem of bassist Clark Bush and drummer Steven Ledbetter.

Moments after I arrived at The Hummingbird on an otherwise quiet Thursday evening last month, a succession of short, bass-laden samples erupted from PA as Floco Torres walked to the front of the stage and delivered a series of explosive rhymes. The samples were a warm-up for Torres, but his focused delivery certainly felt like the real thing. “We’re gonna take our time,” Floco remarked as the last sample faded out and  his band joined him on the stage, “because we’re gonna be up here all night.”

Throughout their focused set, Floco and his band — featuring new members Shawn Williamson on guitar and Justin Cutway on bass, along with drummer Travis Reeves and D.J. Montalban who have been with the group for over a year — covered pieces from their latest album, Floco’s Modern Life with a freshness and intensity that is often absent when a group has been covering the same material for months. It has been a milestone year for Torres on a number of professional fronts — the release of his album and an important collaboration with the organization Gateway Macon stand out — and that has only added to his confidence and ability as a bandleader and performer. These factors, and the cohesion of his new and improved band, made for a riveting set of music.