An edited version of this article can be found in the current issue of Macon Magazine. This version is complete and unedited. 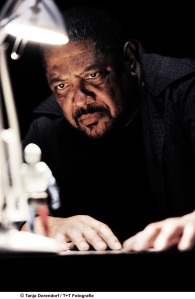 Throughout his storied career, Macon native Allan Evans has performed many of what he calls “the monumental roles of operatic repertory.” From the brash Don Giovanni, to the jealous and violent Dr. Schön in Alban Berg’s Lulu, and the Norse god Wotan in Wagner’s Die Walküre, Evans’ stentorian bass-baritone and commanding acting skills have won him universal praise in his adopted home of Mannheim, Germany, and hero status in his hometown. “I have many favorites,” Evans remarked of his varied stage personas, “because I have always had the good fortune to sing only the roles that I liked.”

In many ways, the details of Evans’ biography read like one of the heroic dramas staged at Mannheim’s historic National Theater. Born in Macon in 1941, Evans is the oldest of eight children born to Will and Mildred Evans, and a standout in a family of over achievers. “I attended Bibb County public schools, and graduated as an honors student from Ballard-Hudson Senior High in 1959,” recalled Evans before adding, “neither of these schools exist any more, as if my childhood in Macon never existed.”

The de facto racial segregation of Evans’ childhood is – thankfully – a memory today, but it was a harsh and undeniable reality for the Evans of Jackson Street Lane. “Jim Crow was created to serve a purpose, and to have defeated that monster has been my greatest accomplishment,” wrote Evans in an e-mail message. His brother, Dr. Billy Joe Evans, reiterated this point, but added a lesson that loomed large for the Evans’, “(the segregation) was pretty solid and rigid, but for us, we weren’t looking at what was going on in the other half of Macon.” Indeed, Will and Mildred Evans instilled an ethic of hard work and humility in their children that left a lasting impression, as did the vibrant and thriving African-American community that their children were a part of, especially in the schools.

“My sister Lillian!” Evans’ exclaimed when asked about his mentor, and older half-sister (from his father’s previous marriage), Lillian Roundtree Ford. Living across the street from the Evans’, and teaching at Unionville Elementary School, Ford was, as Evans describes it, “the greatest influence on my academic life.” As it turned out, she would be the first of many.

After our initial interview, Evans sent an e-mail with treasured photo attached: a decades-old group portrait of the beaming singer seated among a group of his former teachers from elementary, junior, and senior high schools. Seated next to Evans – and smiling broadly – is Ford, and standing behind him is Bernice Blount, Evans’ 5th grade teacher who “took me to what seemed to be every black church in Macon to sing.” Ballard-Hudson music teacher Aquilla Jones Thompson, who introduced her star pupil to the works of Handel, and, as the singer explained, “(taught me) the classic arrangements of Negro Spirituals, which have remained with me to this day,” sits to Evans’ right, her smile registering the pride that radiates from the photo.

Despite the unwavering support of his community – or arguably because of it – Evans knew that he would have to leave Macon in order to pursue his career. “It was taken for granted that we would leave;” explained Dr. Billy Joe Evans, who also left to pursue an academic career, “that we would not be able to realize our aspirations easily if we stayed in Macon.”

Evans’ path led due north after a year at Knoxville College in Tennessee. The young singer’s days at The College of St. Thomas, then Macalester College in St. Paul, Minnesota were filled with music, and it wasn’t long before influential Twin Cities residents took note of Evans’ singular talent. Foremost among them were DeWitt and Lila Acheson Wallace, the founders of Reader’s Digest and namesake of what would become the Wallace Foundation. Evans met Mrs. Wallace on one of her many visits to Macalester, and the two bonded immediately. “I was later invited to Pleasantville, NJ to sing for the staff of Reader’s Digest, and from then on, Mrs. Wallace was my benefactor,” Evans explained. The Wallace’s support enabled Evans to settle in New York City to study at The Juilliard School, where he had already been accepted with a full tuition scholarship.

After completing his studies at Juilliard, Evans’ made his next unequivocal career choice. “The decision to move to Europe was settled as a student at Juilliard,” he recalled. “An opera house in literally every town meant more opportunities, and theater is managed by the minister of education, which shows you how highly-rated the profession of an opera singer is.” By the late 1960’s, Evans was gaining a reputation as a formidable bass-baritone singer, and an equally powerful actor. Studying at Bayreuth in Germany (the epicenter for the study of Richard Wagner’s celebrated works), The Munich College of Music, and the Salzburg Mozarteum in Vienna, Austria, the young singer was immersed in the so-called “heroic baritone” roles that could very well have been written for him.

Evans first major engagement was with the Viennese chamber opera, but his growing reputation quickly led to prominent roles in Basle and St. Gallen, Switzerland, Copenhagen, Luxembourg, and nearly every small city in Germany. In 1987, he joined the ensemble of Mannheim’s historic National Theater, and began one of the most rewarding phases of his career. “Allan was a treasured stalwart fixture in the ensemble,” recalled James Moellenhoff, a colleague of Evans, and a celebrated bass singer based in Europe. “(He was) a mentor for the younger singers, (and) I consider myself fortunate to have sung with him and learned much from watching him perform.”

Mannheim’s National Theater was the perfect venue for Evans to take on the most rigorous operatic roles, and in his twelve years there he won widespread acclaim for his virtuosic interpretations of roles by Wagner, Strauss, Stravinsky, and many others. Evans demurred when asked to name his favorite role, instead saying “when one has been successful singing the truly monumental roles of operatic repertory, one can only be grateful and humble for the chance.” His colleagues, on the other hand, have no problem naming favorites. “My favorite, although tough to single one out, would be his Amfortas,” Moellenhoff said, referring to the demanding baritone role in Wagner’s opera Parsifal. “The one I like best would probably be in Die Walkure,” Dr. Billy Joe Evans remarked after a short pause, referring to Evans’ role as Wotan in the second of Wagner’s four Der Ring des Nibelungen or Ring cycle operas.

Although favorites vary, Evans’ colleagues and family all agree on what another of Evans’ colleagues, the celebrated opera director Olivier Tambosi mentioned in a recent interview: “What distinguishes Allan as a complete artist is not just his musicianship, and the vocal power and beauty he brings to his roles, but also his meticulous preparation, and the intensity of acting he brings to his roles, and his larger-than-life presence on the stage.” In 1996, the German government followed the lead of Evans’ fans and colleagues by awarding him the title of “Kammersänger,” which translates to “chamber singer,” and is one of the highest honors the country bestows on distinguished singers.

While he was reaching career highs in Mannheim, Evans regularly took time to return to Macon to perform with the Macon Symphony Orchestra, at Wesleyan College, and at the Douglass Theater, and established a scholarship in his mother’s name that was given annually to a talented Macon student. “He had a great care for Macon musicians, and he wanted to support them” remarked Nancy Brown Cornet, a co-founder of The Macon Arts Alliance, and a close friend of Evans. “The scholarship was to demonstrate the importance in my life of a mother who did not enjoy an extended education, but understood the importance of such an education for her children,” Evans explained. “It was my way of saying ‘thank you’ to the first singer in my life,” he continued.

Evans’ pilgrimages to his hometown continue to this day, despite his busy performance schedule. In the last three years, the veteran singer has taken on challenging ensemble roles with the state theater in Kassel, Germany, performed in Olivier Tambosi’s production of Gaetano Donizetti’s Lucia di Lammermoor at the Bregenz Festival in Austria, and has worked as a professor at The International Theater Akademie in Gottingen, Germany, but it’s still possible to catch a glimpse of him walking down Cherry Street, or perusing the galleries at The Macon Arts Alliance. “I think he feels it’s important to return to Macon,” Dr. Billy Joe Evans remarked, before bringing it back to his family and community: “It came from our parents, and also our teachers. If we got a big head, our teachers would call us down, so Macon is still very important to us.” For Evans, it’s simply in keeping with the profound humility that has always kept him grounded. “In the time of great hardships,” the singer intoned, “Macon was home. It is still home, and will always be home.”