For all of his sonic manipulations, kinetic energy, and creative focus, trumpeter Cuong Vu never strays far from a strong melody.

It is a unifying element in a professional career that has spanned nearly twenty years with his own idiosyncratic groups, and associations with artists like Pat Metheny, David Bowie, and Laurie Anderson, among many others. Whether it is piercing through the tumult of a group improvisation, or reinterpreting a well-worn standard with a daring, minimalistic approach, Vu’s focused melodicism is at once bracing and irresistibly compelling.

On two new releases, Leaps of Faith and Speak, Vu is joined by a coterie of like-minded musicians who share the trumpeter’s vision, and seem eager to push him into ever more exciting musical territory.

Leaps of Faith begins with a starkly atmospheric interpretation of Body And Soul that begins with a thirty-second wash of sound, punctuated by sonic blips from electric bassists Stomu Takeishi and Luke Bergman. Vu emerges with a familiar melody made barely recognizable due to the piece’s glacial pace and lack of ornamentation. The entire performance has an otherworldly quality to it — like a familiar voice slowed down on tape — and the effect is both startling and refreshing. Vu follows takes a similar approach on All The Things You Are and My Funny Valentine, stretching the melody to the breaking point, and in effect creating an entirely new piece.

The members of Vu’s 4-tet  are equally committed to the leader’s approach. Electric bassist Stomu Takeishi — a long-time associate of Vu’s — often provides a foil to Vu’s melodic line, and melds perfectly with drummer Ted Poor’s sinewy percussion. Rounding out the unorthodox 4-tet is another electric bassist, Luke Bergman — a former student of Vu’s at University of Washington in Seattle, and now a frequent collaborator — who somehow manages to supply chords and effects without stepping on Takeishi’s toes.

The group’s interpretation of the Vu original Child-Like (for Vina) is most illustrative of the 4-tet’s commitment to group cohesion and controlled freedom. Following Vu’s trumpet on an upward arc that climaxes ten minutes later with a storm of distorted bass, bracing percussion, and ripping brass lines, the band’s flawless execution and collective focus is thrilling.

Vu made waves a few years ago when he left New York for his hometown of Seattle, and in the ensuing years, he has helped to create a thriving scene both as a player and a professor at the University of Washington. The trumpeter’s bandmates on Speak are all former students, but you wouldn’t necessarily know it to listen to the album.

While the teacher’s influence can be heard throughout, it’s clear that the ensemble has moved way beyond a mentor/mentee relationship. Vu’s trumpet melds beautifully with saxophonist Andrew Swanson’s lines on pieces like People of Cats, an episodic and assured composition by bassist Luke Bergman, but often takes a backseat to the contributions of his bandmates. The exception is Polypockets, another Bergman original written around a series of poly-rhythmic figures in 7/4, where Vu enters the fray with a series of distorted screams and clipped figures after powerful solos by Swanson and keyboardist Aaron Otheim, before the ensemble hurtles into a cacophonous finale.

Each of the album’s six compositions is penned by a member of the quintet, with the exception of Vu, and from the keyboardist Aaron Otheim’s progish opener Amalgam In The Middle to drummer Chris Icasiano’s furious and aptly-titled Pure Hatred, its clear that this young band takes its composing as seriously as its playing.

The band even plays together like a group of composers. While spontaneity and improvisation figure heavily into the performances on Speak, the thematically heavy compositions always end up sounding through-composed. While this undoubtedly has a lot to do with a composer’s M.O., it also speaks to deep rapport of the group. It’s certainly nothing new for Cuong Vu, who has made a name for himself as a member of highly attuned ensembles, and if this strong album is any indication, it’s a practice he has successfully helped to passed on to a new generation.

The Woolly Moon & Assateague at The Golden Bough 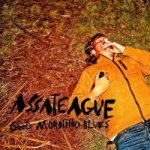 Just when I had started to take my weekly music fix at Macon’s great indie bookstore for granted, the music stopped. Not permanently, thankfully, but enough to make Tuesday nights in Macon seem especially quiet. The man behind the music — a great musician and sound engineer himself, Clark Bush — had to take a hiatus from booking shows to attend to pressing family matters.

It’s a little scary to think that our music scene is so dependent on a few dedicated people to keep things moving, but it’s also an important reminder not to take those people — or anything — for granted.

For that reason, last Tuesday’s show came as a surprise to me. I would have missed it if it wasn’t for the event listing on my Facebook page, and I’m really glad that I didn’t. I had never heard of either The Woolly Moon — a one man band featuring Baltimore-based singer and multi-instrumentalist Zach Mazzola — or Assateague — a duo featuring San Franciscans Wiley Laufman and Danny Gotimer — but by the end of their quietly assured show, I was a fan.

Zach Mazzola, aka The Woolly Moon, opened with a set of covers and originals. Sitting at the edge of the room’s tiny stage, Mazzola encouraged his audience to sing along before easing into “I Gotta Feeling,” the ubiquitous chart-topper from The Black Eyed Peas. Stripped of auto-tune effect, and delivered in an ethereal baritone, the song’s catchy refrain — “tonight’s gonna be a good night” — had a detached, meditative quality.

I wasn’t sure what to make of Mazzola’s vocal delivery at first — the singer forgoes vocal effects and even recognizable pitches in favor of a resonant monotone — but by the second song, the effect he was going for became clear. Detaching words from their intended pitches, Mazzola added a layer of abstraction to a piece while also shining a new light on the evocative lyrics. This recording of his song Angry At The Sun, is a good example of his technique. Definitely not something everyone would enjoy, but to my ears, it added a singular element that made the performance memorable.

Assateague — a band named after the barrier island that runs along the coast of Maryland and Virginia — was also transfixing, but for entirely different reasons. Lead singer and guitarist Danny Gotimer’s cooly delivered vocals and lulling instrumental lines were foiled throughout the set by the electric bass and occasional slide guitar lines of Wiley Laufman, which added the perfect amount of funk and Americana grit to the duo’s placid songs.

This track, Old Song, from their newly pressed recording Good Morning Blues really captures the breadth of duos’s sound. I really enjoyed their set, and the album sounds great. My only regret is that I didn’t pick up one of their hand-silk screened LPs at the show. What was I thinking?!